Power over Ethernet or PoE is a technology that provides both electrical power and data transmission to remote devices, such as IP phones or cameras, over standard Ethernet CAT5 cabling. PoE devices can be placed in remote locations eliminating the need for power outlets, allowing greater flexibility in the location of networked devices and in many cases, significantly decreasing installation costs.
Even though it was only adopted in 2003, the IEEE 802.3af standard for Power over Ethernet has been widely accepted,

delivering power in tandem with data. The total amount of continuous power that can be delivered to each node, taking into account some power loss over the cable, is 12.95W which is more than adequate for early adopter applications including standard VoIP phones, security cameras, and wireless access points.

Since then, PoE infrastructures have become much more abundant in many industries. Fixed security cameras are gaining full motion, wireless access points are providing stronger signals at far greater distances, and VoIP phones provide video and other peripheral settings. These days, these devices demand additional features and higher power than the standard 12.95W limitation can support. As a result, IEEE 802.3at, also known as PoE plus or PoE+, was developed on the IEEE 802.3af specification in order to support this increased demand for high-power functionality.

The updated IEEE 802.3at PoE standard provides up to 25.5W of power per port and is backward compatible with all existing IEEE 802.3af devices, meaning that commonly deployed VoIP phones, WAPs, and IP network security cameras will operate on PoE plus ports.

Like the IEEE’s original power over Ethernet spec, 802.3at is a universal standard. It roughly doubles the 12.95 watts that 802.3af supplies, making PoE feasible for a whole new group of high-powered devices that continue to emerge in today’s market. The original 802.3af standard had made it possible to power VoIP phones, wireless APs, and even some cameras over standard Ethernet cabling, but the new standard 802.3at allows a broader range of devices to be powered such as cameras with pan/tilt/zoom capabilities, door controllers, POS terminals, and/or APs that support 802.11n. 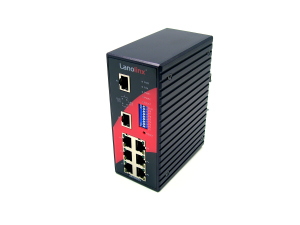